The Anglesey weekend weather was not what we were hoping for, Steve quite enjoys driving in the rain but not necessarily sitting in it! We were both struggling all day to get any kind of grip, where normally in the wet the SBD Dallara has been really good, it could be that the wet tyres are now very old in the region of 3 years. Matt was struggling more than Steve and the day was ok but no more than that. Steve analysed the data and had reverted to some older traction control calibrations for the very wettest settings.

Since we were using the weekend as a test session, it was decided to make some dramatic changes overnight to the car ready for Sunday to try and achieve some grip in the cold weather, which we were hoping would be dry, but even from the beginning of the day the car had no grip and whoever got the cold tyre run effectively had no grip to the point where the car would understeer and oversteer through a corner. It was slightly better for the second driver but still not great. Steve made further changes to the set-up, which should have at least improved the rear grip, even if it compromised the front grip, but none of this worked and the car would over-rotate in every corner, particularly in the slow speed corners. Matt was able to deal with this better because he likes a sharper front end, where Steve prefers to lean on the rear of the car more into the entry of the corner. Whatever we did, we couldn’t get the tyres to switch on.

Steve has now spent a lot of time looking at the data and hopefully has some ideas as to what the issue was and we will be testing them at the final rounds at Castle Combe. 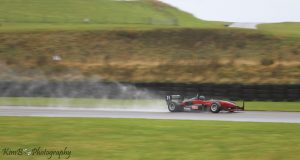 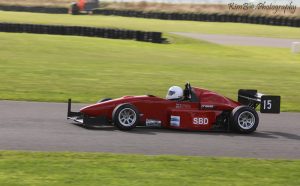 All photographs by Kim Broughton