Because of workloads, we only managed to test the SBD Dallara for the first time at Llandow on the Monday before the first British Sprint round at Anglesey. There was a lot to test, with all the new aero changes designed by John Hughes and made for us by John Hansell Fibrelyte, plus we had finally managed to get the prototype 2L XE big bore, short stroke engine in the car. We had also gone to smaller tyres because we were struggling to heat the larger tyres up. Both Steve and Matt reported that the car felt very stable and the engine was responsive. Because of the new tyre sizes, we were making geometry changes until we achieved even tyre temperatures. It was difficult to gauge exactly how good the car was going to be because we had no data for the Llandow circuit.

Arriving at Anglesey, it was much colder than earlier in the week and although the car was still feeling nice to drive, tyre temperatures were much colder and we were struggling with rear grip. We were worried that we were still going to have the same issue as with the bigger tyres, but Steve was managing to message Toby Phillips who was working at Imola and he was suggesting that the new aero was working well, that is was keeping the car running flatter, which was reducing weight transfer. We slowly dialed the car in on Saturday and it was improving. Matt was still struggling a lot, but Steve was more comfortable and achieved 2nd in the both run-offs. On the Sunday, it was dry but even colder and we were still struggling with rear tyre grip. Matt was more comfortable and got a run-off win in the morning, where Steve was less comfortable and got 4th. Steve messaged Toby again and he advised a dramatic change to the car, which we did over the lunch break. Matt, then said the change wasn’t good, but Steve driving 2nd thought it was a big step forwards and knocked a massive chunk of his time to qualify fastest. With only the final top 12 to go, we made no changes and Matt put extra effort in and produced a really quick time. Steve was confident that he could improve his time because the changes made earlier had suited him more than Matt, however come the end of the run Matt had pipped Steve by 6/100th. When Matt looked at the data later on, Steve was way up for more of the run but the time was mostly lost in one corner where the car was understeering for Steve. So they both agreed that the car is a step forward this year, but still some more setting up to be done to get the best of the car. 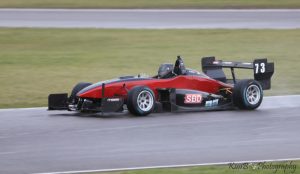 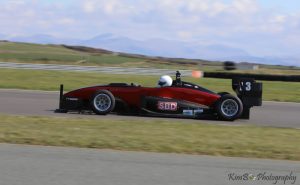 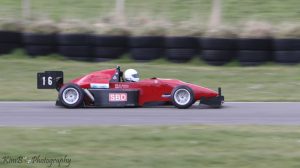 Steve was winning the championship after these rounds and got a mention in Revolution, the MSUK magazine. 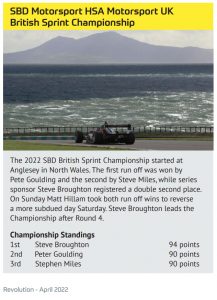