Second time to Goodwood in two weeks, a little bit warmer than the last outing. We had made some more rear suspension set up changes in an attempt to overcome the car bottoming out through the high speed corners. In practice, Matt put in a time quicker than his best time 2 weeks ago and Steve also managed to go faster than the last time he was there, so the car was already feeling good. We decided to make no changes to the car, unfortunately on Steve’s run there was some confusion on the start line and the car wasn’t lined up properly causing a slow start, so it was a few hundredths slower than his practice. Matt did a personal best and broke into the 72s for the first time. Come the 2nd timed run, everything went perfect for Steve and he managed to break the sprint course record with a 72.50s. As the car went faster, Steve could feel the car begin to bottom out going through No Name, also whilst going down the straight so whether the car is porpoising like the F1 cars, we aren’t sure, but because of the softer spring damper set up, this may be adding to the problem, however the grip through the corners has significantly improved since the changes.

Another advantage, which we weren’t necessarily looking for is that we have improved our 64ft time and the car was consistently doing 64ft in 1.8s, Steve getting the best at 1.81s in practice, which was even faster than the Nissan GTRs with 4 wheel drive. The start line is in the shade at Goodwood, so on some hotter days hopefully the grip will improve still further. On the final timed run, we made some changes to the damping to see if we would take control of the bouncing and although it was reduced, Steve felt that the grip was not quite as good even though he normally likes a stiff set up, so some more smaller changes to be tested at the next British round at Blyton Park this coming weekend. 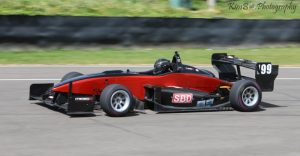 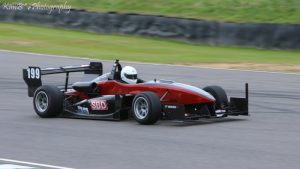