The SBD 2.0L XE Dallara was driven by Steve & Matt.

The SBD 1.6L EcoBoost was driven by Zoe & Steve.

Carole was competing in her Hayabusa powered SBD OMS CF04.

Our trip to Pembrey was a weekend of highs and lows. The lows started about 10mins from our workshop when we got stuck in the traffic on the M25! A long 7 hours later we got to Pembrey, but at least the weather was now bright sunshine.

Steve & Matt were sharing the SBD 2.0L XE Dallara and once again we were testing new aerodynamic changes with alterations being made throughout the day. The new British Sprint Championship Top 12 style had been introduced at the beginning of the season, which means that although there were still 2 run offs, points could be gained for each one. Both Steve & Matt qualified for the run off, Matt qualifying faster and getting to go 2nd and have the benefit of the warmer tyres. Matt won the run off with 93.91s and Steve Miles finished 2nd with 95.94s. Both drivers then went out to qualify for the 2nd top 12, Matt went first and once again qualified, however when Steve went off the start line, unfortunately a grub screw in the throttle system had worked loose so he had to abort the run coming up to Hatches Hairpin. Unfortunately because he failed to finish the run, he didn’t qualify for the run off. We fixed the throttle in time for Matt to compete in the Top 12, this time he finished 2nd to Steve Miles’ 1st. At that point, the rain which has been drizzling on and off all day, started coming down heavier so we packed the cars away and retired to the hotel.

Next morning, when we were checking the car, Steve noticed a notch out of the cam belt, which meant that the Dallara had to be retired from competing that day.

Zoe, who had been competing quite happily on her own on Saturday in the SBD 1.6L EcoBoost Westfield, then found she had a co-driver – Steve! She had been gradually getting faster over the day despite the changeable conditions, also qualifying for both BSC run offs.

On Sunday, we were competing on the Clubmans Circuit and the weather was sunny with a few clouds.

Zoe was going out first for the runs and once again gradually improving her times. Although Steve had to re-adjust to driving a Westfield again and having no downforce, to carry him round the corners, he felt that the car wasn’t handling very well. He made some small changes to the set up during the day in an effort to improve the handling. Both competed in the 1st Top 12 run off, however because the temperature of the tyres is very different for the first and second driver, for the 3rd timed run, it was agreed that Steve would go out first to feel the difference. Off the start line he was going well even if it was a little lively at the rear, unfortunately the rear stepped out just on the entry to Woodlands and Steve had to make a small correction which forced the car slightly wide, causing the car to head towards the edge of the circuit and touched the grass causing a spin, which launched the Westie into the air when it hit a bump in the grass, which ripped the floor off (it stayed in one piece!), he then spun another 360 degrees and stopped facing the wrong way but back on the track! And that was the end of the Westie’s day. YouTube Video 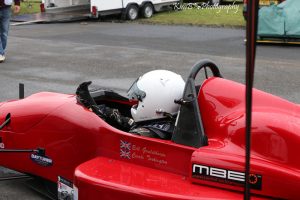 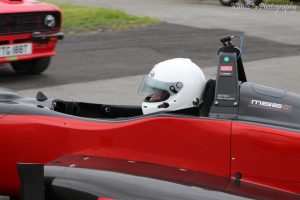 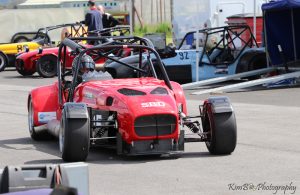 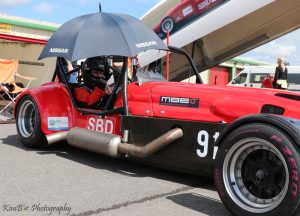