Carole will be competing in her Hayabusa powered SBD OMS CF08.

After Lydden, we made some fairly major set up changes to the SBD Dallara based what we discovered during the day. We bolted on the new tyres from the start of the day because we knew the new ones would be quite different. The car instantly had more grip, but the balance of the car with the new tyres was quite different and it took us quite a few runs to get the car dialled in more. It is also a circuit we haven’t been to since 2019 and an extremely technical circuit, which Steve has only done a few times before, where Matt has a lot more experience there. We took a lot of advice from Alan Mugglestone on how to approach some of the corners and he also explained that as the old front tyres had worn, they give up grip sooner than the rear due to the number of heat cycles that have gone on.

Steve was particularly comfortable in the car, the new aero changes to the floor have made the car very consistent in feel, which gave him the opportunity to spend more time learning the circuit and less time worrying whether it was going to go in the scenery. He made significant improvements over the weekend. Matt, who although was doing better than Steve, wasn’t relaxed and getting the best out of himself and the car. By the end of Sunday, the car was feeling very balanced and Matt looked like he was going to get a win being 0.8s up at the curved split, unfortunately overdrove Bunga Bunga and threw it all away. Once you have messed up there, it is impossible to regain it and finished 0.06s to give Steve Miles another win. We can’t be too disappointed since he is one of our customers and doing a brilliant job, getting it together at the point he needs to, so well done to Steve Miles. 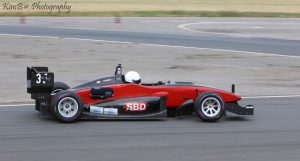 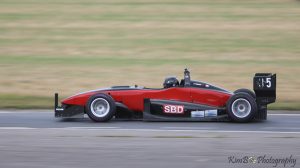 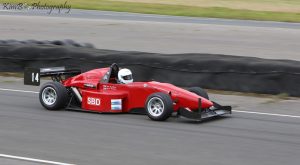