Steve & Matt will be competing in the SBD 2.0L XE Dallara

Steve’s Report:
Unfortunately we picked up a foreign object on Matt’s Saturday practice, which got wedged in the cam belt, jammed one of the idlers, the engine kept running creating lots of smoke as the cambelt was catching light due to friction. Fortunately nothing jumped & we stopped the engine before the belt failed. The car was stripped down, while John Hughes makes an 8 hour round trip. Thanks to Blyton Park Driving Centre for allowing us the use of their workshop.

After the Saturday saga, once the car was put back together again and run up on the Saturday evening, the car was ready to go for the Sunday morning. Steve had made some damper changes as advised by Toby from the information gained at the last Goodwood. Matt as usual drove the car first and felt comfortable in the way it handled. Steve was also very comfortable on practice, particularly at an event that he is not a great fan of and has always struggled to get to grips with. It was decided to leave the car alone and make no changes and the car felt even better as the track temperature rose. We qualified well for the 1st Top 12, Matt put a good time in to win and Steve was happy with 3rd. After lunch, Steve drove 1st and was again happy with his run and felt that he was making progress on the circuit, even though he thought he still wasn’t getting any of the corners correct. The car again felt good, the track temperature had warmed up more and both drivers thought that the car was great, they just weren’t getting the lines right through many of the corners. Steve ran first in the Top 12 and managed to put in a good run, finishing 3rd and Matt did even better almost a full second ahead of everybody else setting a new class record and only just missing out on the outright record. Steve looked at the videos after the meeting to work out where Matt was getting everything perfect, but after studying both videos in quite a bit of detail, decided that neither driver was getting any of the corners anywhere near perfect and with more seat time and learning the circuit, there is a lot more to come.

Carole’s Report:
Last weekend 14/15th May was another round of the British Sprint Championship organised by Longton & District Motor Club who once again put on a very well run event. We were competing at Blyton Park in Lincolnshire. The Saturday was the Eastern circuit which I find a little challenging. We had 1 practice and 4 timed runs throughout the day. I managed to improve my times on the first three runs up until the lunch break, but unfortunately was a little slower in the afternoon. I managed a PB on T2 which I was very pleased with.
The Sunday morning started wet for first practice. We were competing on the outer Sprint circuit. I had walked the circuit on Saturday evening which was very useful and improved on my times throughout the morning. After lunch having watched some of my videos I could see where I needed to push harder which paid off with me improving on every run and finishing the last run of the day with another PB time and 1st in class.

Another great weekend of racing and once again thanks to Longton for a very well run event. 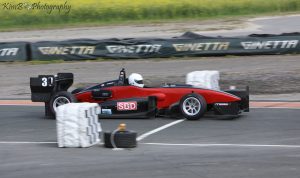 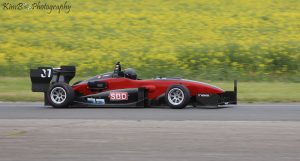 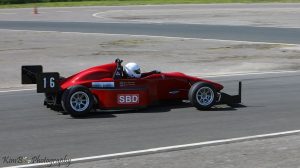