Steve & Matt will be driving the SBD 2.0L XE Dallara

Our first event at Goodwood for the year, our closest circuit and ideal for carrying out testing because Steve has been going there for as long as he can remember. We had made a few software changes to the gearbox control to see if we could further improve gearshifts. John Hansell had managed to finish making the double element rear flap because the single element was running at near maximum at Anglesey and Steve fitted it on the Friday. The good news was that even with the rear wing set at its maximum, the drag it was producing was less than expected. The top speed was much higher. Fitting the double element flap meant we could run it at its minimum setting, which is more efficient than running the single flap at its maximum. We had also done some damper changes to the rear of the car to try and improve traction. The car was very good in 1st practice and Steve managed to put in a quick time, Matt was a bit slower because he always likes to work up gradually (or is it wake up gradually!). The car feels considerably more stable than it has ever been before, the new aero package has given us a different level of comfort, but the set up requires quite a few changes to get the best out of it. The damping still isn’t quite right as can be seen at No Name in the video, which it wheel-spinned at 147mph going over a bump at the apex! We made various small adjustments throughout the day and it wasn’t until the last run the adjustments we made to the rear rollbar and damping gave the car a step forwards. Steve managed to get FTD with 73.63s. There is still a little more work to the rear suspension and we will have a few more changes to test when we are back at Goodwood on 7th May before we are off to Blyton Park the week after for the next British round.

The new prototype big bore, short stroke XE engine is going well, although there is still a lot more testing required and further upgrades before we will release it. 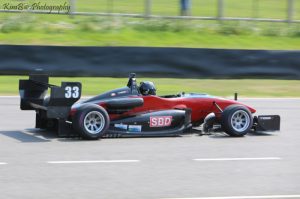 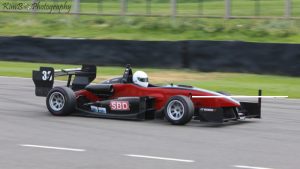