Carole will be competing in her Hayabusa powered SBD OMS CF08.

We had another good result at the weekend, the car is steadily improving, we are fine tuning the balance of the car before we begin to add downforce. We are still running very old Pirellis, which are still working extremely well and we plan to do this for as long as possible until the car is in a place that is in a place that both Matt & I like. We have made quite a few set up changes from the previous meeting, although they were fairly small, they have a significant effect on the cars handling. 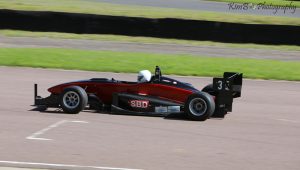 Since Lydden was extremely hot, the larger tyres we use were coming into their own, even double driving it is quite often difficult to get them to the correct temperature. On some colder events, the smaller tyres used by many of the cars heat up quick and give an advantage and the temperatures seen looked as if the smaller tyres were only good for one run at their best and once they go over this, unfortunately they don’t recover quickly. I feel particularly bad for Steve Miles, who was doing some storming driving and achieved FTD, but when he got to the points scoring runs, on one particular run he looked to doing a storming drive and caught a slower car on track. He came back round for his re-run, but they sent him straight to the line. He should have taken some time to let the car and tyres cool as everything was overheated, unfortunately once on track for his re-run, the tyres were no longer working, so through no fault of his own, it destroyed his points scoring.

On one of Matt’s runs, in the heat of the moment, only one number got changed and this wasn’t noticed by us. There was some confusion and unfortunately either his time got accidentally deleted or lost. Fortunately Roger (Borough 19) has realised the error, in the meantime since Matt’s time hadn’t appeared. After some time, Matt went off to find out what was wrong. We had then started to strip part of the car down, ready to make some changes before the next runs. Eventually, we were told the time couldn’t be retrieved and he would have to do a re-run, fortunately for Matt. We hurriedly put the car back together and managed to get a great run in and scored maximum points.

Obviously it is a real shame for Smiles, because it could have been fight between Smiles & Matt as they were both driving brilliantly on the day and deserve to score the points for doing great jobs and although if they had both failed to get good times, I would have increased my points score along with many other drivers. I don’t want to score better points because of technical reasons, I always want to score points because I have performed better than other drivers out on track.

I am now going to use up one of racing driver excuses as to why I am generally not doing as well as Matt – last year when we were at Goodwood and I had a spin, at the next event which was Castle Combe, the car didn’t handle at all well and we assumed that we had damaged something on the front suspension. What is now looks like though is that we made the fatal mistake, which we should never do and tell all our customers never to do, is to change more than one thing at a time. The problem was that one of the changes improved the car, the other change made the car significantly worse, but overall the car seemed to be as quick, it wasn’t until we got to another event, that the car seems to handle very strange. This sent us off in the wrong direction and we have been gradually dialling all the changes back out the car and the closer we have got back to the original settings the faster the car is getting. Still not quite there yet, because the aero changes that have been added to the car end up being classed as two changes at once, so even though the car is nearly back to its original settings, we have to take account that the aero dynamic changes can have a huge change to the feel of the car.

Matt is obviously more comfortable with the way the car currently feels and doing a great job. I hope that over the next few events, the car can be dialled in to something that makes me feel comfortable and we can get a proper fight between the pair of the us.

So the moral of the story is don’t change more than one thing and listen to your own advice!! 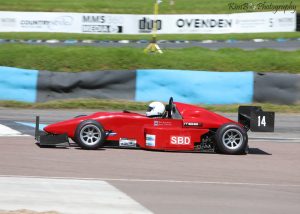 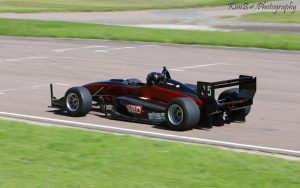