Steve’s Report:
The weather reports for Saturday were showing it was going to rain all day, but fortunately it didn’t materialise until we were packing up! It was a little colder than we would have liked for June and in practice, we were struggling a little with rear grip, so we softened the roll bar off, this improved the grip significantly. Steve & Matt were fairly even in practice, but Matt was more comfortable in the car and managed a better time in the 1st timed run. The day was going slower than we had hoped and we were running on a different circuit than we had originally expected due to a technical issue with the licences, this meant we were running on the slower circuit. On the 2nd timed run, which was our 1st Top12, the car felt very good but there was a little transition between oversteer on the first half of the lap, which slowly swapped to understeer later in the lap and then the final it was slightly worse again. This limited the speed through the complex. Matt and Steve were reasonably happy with the results but felt there was a lot more to come so we re-adjusted the rear roll bar ready for the 3rd timed run. Unfortunately, we ran out of the time and only managed the 2 timed runs as there was insufficient time before the 6pm curfew to run all the cars.

Sunday we were fully expecting it to be wet, but after Saturday’s event we still weren’t sure, upon peering out the windows, it was definitely a wet day! Steve changed all the settings on the car for the wet set up to make it more compliant and in practice the car felt very good with a lot of grip. Matt felt it had good grip but just couldn’t get into the groove. For T1, Steve decided to put a quick one in to qualify but didn’t push too hard because an off would definitely end the day (memories of last year). Matt was still struggling to relax and get comfortable, we then had lunch. The rain had stopped and dry patches started to appear. Unfortunately, by the time lunch was finished, it was still a bit of a toss up between wets or slicks and we decided to opt for slicks but it was right on the cusp and probably either would have given the same result. Matt went out first and was more unfortunately than he had been in the morning and annoyed with himself for not pushing hard enough. Steve knew that this was possibly the only time to score points as we may not get a 3rd run, it was definitely very understeery at lower speed but it made for a slightly safer car and through the kink, the car stepped sideways but with the new aero set up, he easily got the car back in line without even a lift. He wasn’t sure how good the time would be as Terry had already set a very quick time on his wet tyres of 100.46s Steve did 100.70s just over 2/10th behind Terry to grab 2nd.

After we finished the runs for our class, the rain started to come down again and get quick heavy, we were informed there would be a 3rd timed run and switched the tyres back to wets. While there was less standing water this time, but the main surface of the track was a lot wetter. Matt went first again, still unable to get settled in the car. Terry went a couple of cars in front of Steve and the time that came up for him was almost identical to the 1st Top12 run and almost everybody else was going slower due to the wetter track. Steve tried to be smoother than normal with very gentle steering input and tried to carry more speed in and through the corners. The car felt very fast and had good grip, but possibly a little bit cautious through Honda. The clock stopped at 102.08, it wasn’t close enough but less than a 1/10th on the first split so happy to get another 2nd. 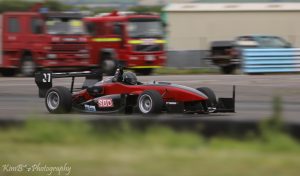 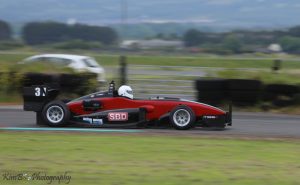 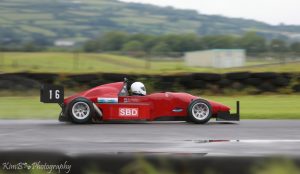